I use Hype 3 in the first project, XD in the second. This time I would like to try some coding.

d3.js is a great js library for producing interactive data visualizations in web browsers. (Processing is another one but not web-based) I looked through their example and open source code. God I don’t understand what is that and my data is not complicated. So I went to find some simple data visualization online tools.

AntV data visualisation provides code so I can replace my data into it and generate my diagram.

Then I copy and paste codes into Hype 3 to arrange the proper position and add some texts to make sure they look like a website, which is my direction in the future. I tidy up three projects together and make them more easy-to-look and professional. That’s the thing I’ve learnt in my DPS. Be ready to present your work anytime. ‘Pitch’ is a good format when you present your concept of design or art campaign. I’ve been to the presentation of design management students. The way they do research and present their idea seems so reasonable and professional even if some of their works do not make sense at all.

Fianlly a gif: How far am I from a loser

I went back to one of the thoughts of chat records on WeChat. Sometimes when I was upset or feeling bad, I want to do nothing but lay on the bed and browsing my social media. Unknowingly I waste the whole day on them and it’s horrible. I supposed to study or read book or sleep at least. So I was wondering that how much time I waste on WeChat.

It’s hard to calculate how many messages I’ve said because the data will be huge. So I chose a few words that I often say and check how many times I said. In this case, I probably know who I was talking with a lot. Expect for messaging, social is another main function of WeChat, which is called Moments. Pretty much like the homepage of Facebook. 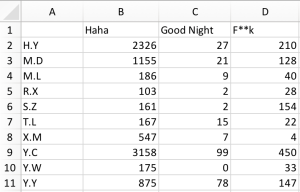 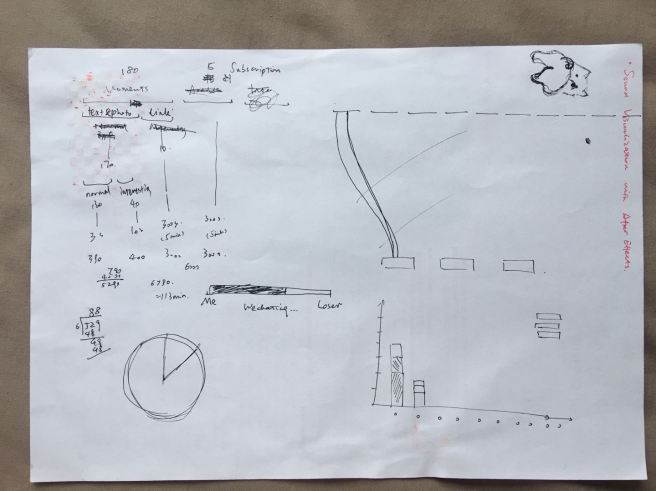 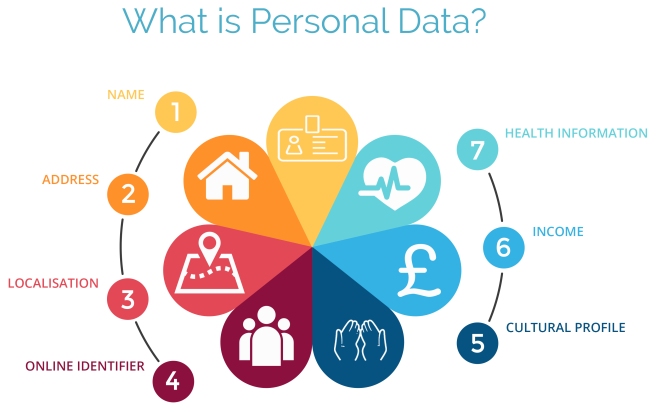 Operating under the pseudonym 0100101110101101.org, they are counted among the pioneers of the Net Art movement and are renowned for their subversion of public media. They produce art involving the ethical and political issues arising from the inception of the Internet. The work investigates the fabrication of situations, where fact and fiction merge into one.

Always watching you. It’s cute and scary at the same time, like the internet.

In order to watch the work, viewers are forced into a series of physically awkward and bizarre positions, in a sense taking on the role of performers themselves.

The SKOR Codex is a printed book which will be sent to different locations on earth in the year 2012. It contains binary encoded image and sound files selected to portray the diversity of life and culture at the Foundation for Art and Public Domain (SKOR), and is intended for any intelligent terrestrial life form, or for future humans, who may find it. The files are protected from bitrot, software decay and hardware failure via a transformation from magnetic transitions on a disk to ink on paper, safe for centuries. Instructions in a symbolic language explain the origin of the book and indicate how the content is to be decoded. La Société Anonyme noted that “the package will be encountered and the book decoded only if there will be advanced civilizations on earth in the far future. But the launching of this ‘bottle’ into the cosmic ‘ocean’ says something very hopeful about art on this planet.” Thus the record is best seen as a time capsule and a statement rather than an attempt to preserve SKOR for future art historians. The SKOR Codex is a project by La Société Anonyme.

The work’s title is 1.8, referring to the length of time in microseconds that the earth’s day was shortened as a result of a single physical event, the 2011 earthquake and tsunami that emanated from Japan. The sculpture’s form was inspired by data sets of the tsunami’s wave heights rippling across the entire Pacific Ocean. The artwork delves into content related to our complex interdependencies with larger cycles of time and our physical world. The sculpture’s net structure is a physical manifestation of interconnectedness – when any one element moves, every other element is affected.

A major exhibition bringing together over 100 works to show the impact of computer and Internet technologies on artists from the mid-1960s to the present day.

Exploring the visual possibilities enabled by repetition, rules and procedures, which she would modify very slightly with each iteration of an image, Molnar soon utilised the computer in order to expedite her process. 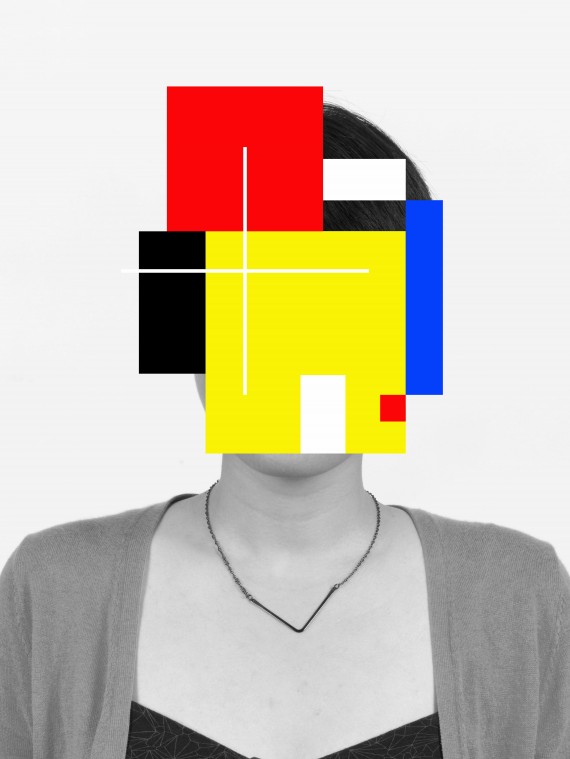 The series is underpinned by the technological developments in Facebook allowing the use of facial recognition software, with or without user consent.

These are some kinds of data visualisation. Abstract, though.

Eve built interfaces in Adobe XD and we did some changes together.

After you log in, there is an interface you can enter ‘where have you been today’ and ‘anything special you met’. The app will help you record location data from daily life to remind you how many wonderful things happen every day. And you can check all recorded locations on the map. The system will recommend you some activities and places that you might be interested in. For example, even if you feel upset at school, the app will still recommend you some workshops or events might cheer you up.

I decided to weaken voice recognition because Angus suggested that it’s not guaranteed to only record someone’s voice only, and it’s not always clear. So voice recognition could be an auxiliary function for recording mood swings and generate wave charts.

After I simplify functions of the app, I found that it’s not just for people with bipolar disorder or depression, everyone can use this app to save favourite places.

The next step will be thinking how to present my idea, showing the app as a UI design studio.

I’ve been looking some apps related to mental health and well-being. Most of them are just imformative apps with terrible interface design. I found one called Daylio. Simple two-step entry creation allows users to pick your mood and add activities you have been doing during the day. You can also add notes and keep an old school diary.

Some of my Sketches:

Some consideration about the whole flow. How to protect users privacy? How to make sure sound records are clear and not affected? Should it be like a social media that you can post some texts and image online and share with others? 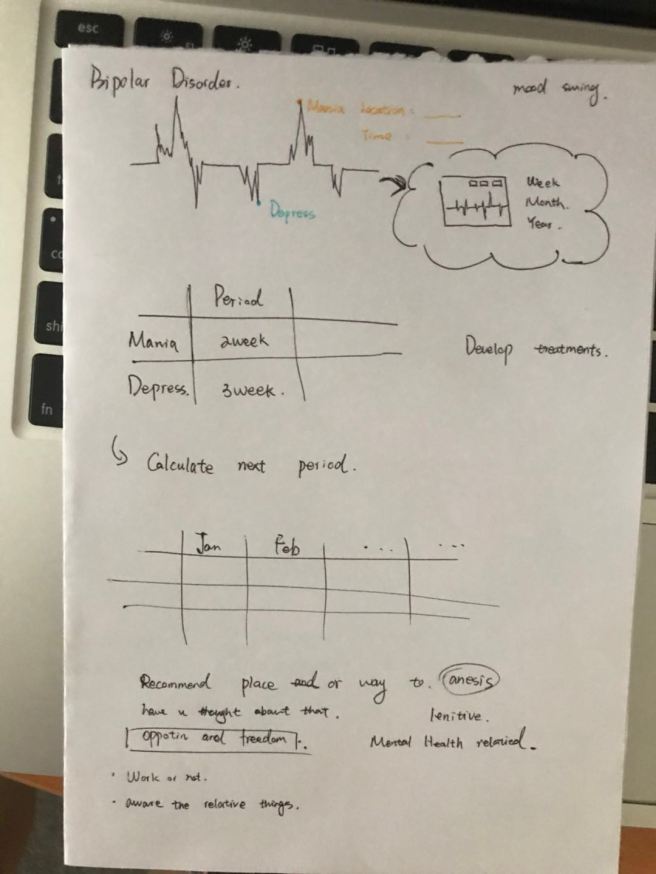 Some diagram to record the period 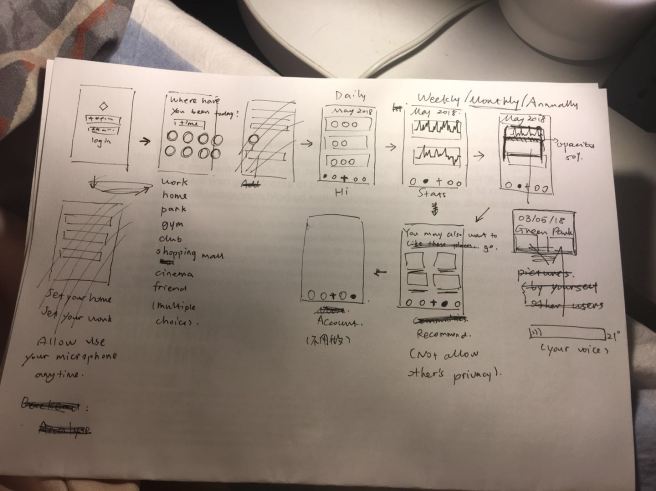 Some interfaces. Log in first, type in where have you been manually. Check periods and locations recommended.

We decided to make an app that helps patients with bipolar disorder to relieve mood and stress during the period of mood swings. We record the locations they’ve been to and emotions within their voice so that we can recognise their frequency and mood when they are in somewhere. Accordingly, the app will recommend some proper places to go.

Bipolar disorder, also known as manic-depressive illness, is a brain disorder that causes unusual shifts in mood, energy, activity levels, and the ability to carry out day-to-day tasks.

The bipolar disorder can be difficult to distinguish from unipolar depression and the average delay in diagnosis is 5~10 years after symptoms begin. Early awareness and intervention also improve prognosis as the symptoms in earlier stages are less severe and more responsive to treatment.

Some people with bipolar disorder experience hypomania, a less severe form of mania. During a hypomanic episode, an individual may feel very good, be highly productive, and function well. The person may not feel that anything is wrong, but family and friends may recognize the mood swings and/or changes in activity levels as possible bipolar disorder. Without proper treatment, people with hypomania may develop severe mania or depression.

Papaya
Create a free website or blog at WordPress.com.